I'm not really a ranting type of person in real life. Honestly, I'm not. This is my healthy therapy space where I can write about what ticks me off about other mothers, rather than having it rolling about in my head like a boiling vat of snakes.

Mothers who ... give their kids crazy names

I'll preface this post by stating I know some people like old family names, and some like to create new traditions.  I know names don't just come out of thin air, and once upon a time every name was a new name.  I get that.  But when I read something like the below I get a bit itchy. 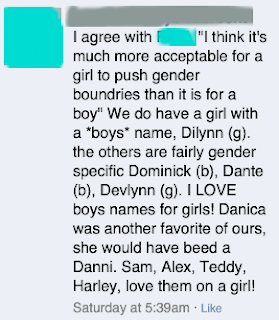 Why does the conventional spelling need to be messed with?  What sort of name is 'Devlynn'?  Is that a boys' or a girls' name?  I think that sometimes parents see two names they like, can't decide on either, so just decide to go with squashing them together.  And 'Dante'?  It sound a bit hell-like to me.  Imagine being Dilynn in a few years on the phone to an Indian call centre.  "No, it's Dilynn.  No, not with a Y.  No, not D-I-L-I-N!  And there's two N's!"  Not to mention Devlynn being teased for his girlish moniker. 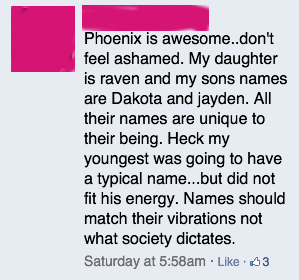 At least some parents put some thought into their children's names.  Did this mother cuddle the child after he was born to feel 'his energy'?  Did he actually vibrate?  Because most children would have  nasty-sounding names if we all tried match them with their newborn vibrations.

Think of the future.  Would you employ a 'Raven' or 'Dante'?  Would anybody take a 'Destiny' or 'Nevaeh' seriously?  Unfortunately, first impressions count.